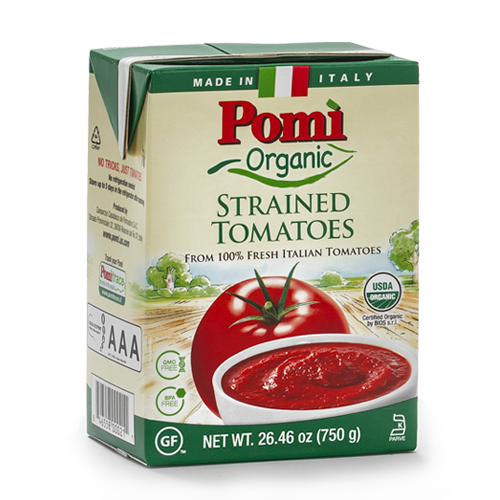 Pomì organic passata sauce is a tomato purée produced with genuine tomatoes, fresh and perfectly ripe, processed right after harvesting. Produced only with organic Italian tomatoes, it is perfect to prepare any type of dish: meat, eggs, pasta, creams and creamy soups. Store up to 5 days in the fridge after opening

In a large bowl, whisk together all of the ingredients up to the chicken thighs, using only ½ tsp of the salt, reserving the rest for later.

Roughly chop the chicken thighs and place them into the yogurt mixture, stirring so they are evenly coated. Cover and refrigerate at least 6 hours, up to overnight.

Once the chicken is marinated, heat the ghee up in a large, non-stick, high-sided pan on medium/high heat. Add the onion and cook until tender, about 3-5 minutes.

Once cooked, stir in the Pomì Organic strained tomatoes, coconut milk, rice and remaining salt until well combined. Bring the mixture to a boil and boil for 3 minutes, stirring constantly so that the bottom doesn’t burn.

Reduce the heat to medium/low, cover and cook an additional 20 minutes, or until the rice is tender.

Stir in the cilantro and golden raisins and serve!

Recipe by Taylor of Foodfaithfitness.com