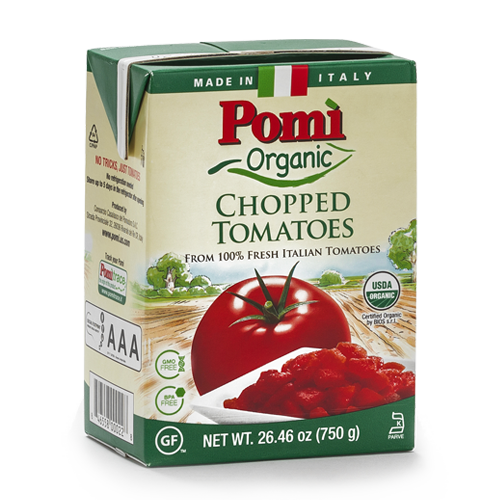 Pomì boxed tomatoes contain a pulp sauce produced only with Italian organic tomatoes, healthy, fresh and perfectly ripe, processed immediately after harvesting. Excellent for pizza or pasta and to enhance the flavor of every fish-based dish. Store up to 5 days in the fridge after opening

My mother’s spaghetti bolognese was one of my favourite meals growing up and I often find myself reminiscing about it. I have my own version of the bolognese sauce now and I make it quite often, though I sometimes change up the pasta to keep things fresh and gnocchi is a great alternative! Gnocchi are Italian soft dough dumplings that are often made with potatoes as the primary ingredient. You can make it fresh or you can buy them at the store either dried or vacuum sealed and you prepare them by boiling them like pasta. You can serve them with any kind of sauce and I like to go with my take on the classic bolognese sauce. The soft and pillowy potato dumplings are magical in a tasty bolognese and things get even better when you cover everything with plenty of mozzarella cheese and bake it in the oven until the cheese has melted. This mozzarella baked gnocchi bolognese is a tasty and satisfying meal that is pretty easy to make and the leftovers taste even better the next day so feel free to make a double batch!

1. Cover the mushrooms in 1 cup of just boiled water and let sit for 15 minutes, before draining, reserving the liquid, and chopping.
2. Meanwhile, start bringing a large pot of water to a boil to cook the gnocchi in and let it boil until ready.
3. Meanwhile, cook the pancetta in a large pan over medium-high heat until cooked and slightly crispy, about 7-10 minutes, before setting aside.
4. Add the ground beef and onions and cook until cooked through and lightly brownƒed, about 7-10 minutes before adding the garlic, pepper flakes and chopped mushrooms and cooking for a minute.
5. Add the mushroom water and deglaze the pan by scraping any brown bits off the bottom of the pan with a wooden spoon as it simmers.
6. Add the bacon, Pomì organic chopped tomatoes, italian seasoning, worcestershire sauce, and balsamic vinegar, bring to boil, reduce the heat and simmer for 5 minutes.
7. Meanwhile, add the gnocchi to the boiling water and cook, draining when it's ready.
8. Meanwhile mix the parmesan into the sauce, season with salt and pepper to taste, mix in the basil and gnocchi when ready.
9. Sprinkle on the cheese, transfer to an oven and broil until the cheese has melted.

Recipe by Kevin Lynch of closetcooking.com